It is easy to understand why Málaga City has been dubbed the capital of the Costa del Sol. Whereas it was once considered to be the poor cousin of Andalusia’s capital city Sevilla, it now competes successfully for attention. Since the opening of the already well acclaimed Picasso Museum in 2003, cultural tourists have been flocking to it and to the now beautifully refurbished birthplace of the great artist, all in the heart of the historic centre of the city.

The spotlight is expected to shine on Málaga for some years to come since the City Council decided in 2004 to present a bid to the European Union requesting it be given the title of European Culture Capital in the year 2016. This bodes very well for work and improvements to continue over the next decade to achieve this goal.

Sea breezes from the Mediterranean coastline regulate the summer heat to more comfortable levels than in the Andalusian towns inland and the Málaga mountains form a perfect barrier to protect the city from the colder weather in winter. It can still be very hot in July and August and it can be cold (minimum of around 13 °C) between December and February. Some much needed rainfall is always expected in the colder months, but it usually does not last for long.

As well as the homage to the great Picasso, other great historic monuments include the imposing Baroque Cathedral, popularly known as “La Manquita” (one-armed woman), referring to its rather lopsided appearance due to the missing east bell tower. High on the hill above the city is the Parador (a state-run hotel) of great historic importance. It was once a Moorish castle and is a wonderful place to either stay the night or to have a long lunch enjoying these privileged surroundings with panoramic views over Málaga city and out across the port to sea.

Although there was much destruction in Málaga, especially during the time of the Spanish Civil War, there is still plenty of proof of the Moorish occupation. Today, you can visit the Moorish Alcazaba fortress, dating back to 1065, which now also features a very interesting archaeological museum.

There are also many churches in and around the centre of great architectural and historic interest and well worth visiting.

Shopping & Festivities & Things to do: 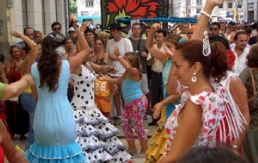 Málaga centre is not only the perfect place to explore the many historical monuments, atmospheric little streets and squares with delightful a café culture, but it is also a wonderful shopping centre. The main street to head for runs perpendicular to the stunning tree lined avenue, the Alameda, and starts at the Plaza Marina, near the port. Calle Marqués de Larios (often simply referred to as “Larios”) was pedestrianised in 2002 as part of the overall improvements being made to Málaga centre. The result is a busy chic area with many boutiques, designer shops and classy cafés, all surrounded by beautifully restored buildings. At the top of Larios is the main square, Plaza de la Constitución, which is the centre of attention throughout the year when cultural, traditional and religious events are being celebrated. It is especially pretty in December, when a huge Christmas tree and decorations become the focal point. During “Semana Santa” (Easter Holy Week), Málaga is taken over by incredible religion processions and the square is decked out with tiers of seats for spectators. Notably, Antonio Banderas often continues to take part in this very important week of religious celebration, just as he has done since he was a young boy.

Also at the main square at the north end of Larios is the entrance to the five-star Larios Hotel, whose visitors include big names such as Málaga-born Antonio Banderas and his wife Melanie Griffiths. There is a very sophisticated cocktail bar on the sixth floor of the Larios Hotel, from which there are stunning views across to the top of the cathedral – especially spectacular at night when it is floodlit. As well as cocktails and other drinks, the bar has food and snacks and there is often live music on offer – a magical venue at any time of year and especially on a balmy summer night. 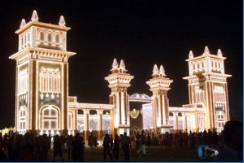 Off Calle Larios, in the meleé of tiny streets and interesting tapas bars, restaurants and even “teterías” (Moorish tearooms), you can find other interesting shops and also the bustling main fresh food market, Mercado Central de Atarazanas.

There are also several indoor commercial shopping malls, just like the one behind the landmark building of the huge quality department store, El Corte Ingles. Whereas Málaga centre previously used to live up to the southern tradition of keeping the siesta time sacred, more and more shops are now open all day. Some of the smaller, family-run businesses may still lock up for a long lunch. But the commercial shopping centres, El Corte Ingles and many of the shops in Calle Larios stay open all day to meet the demand of the residents or tourists who enjoy the freedom of longer shopping hours. During the summer months and leading up to Christmas and to the Three Kings Day (January 6th) many specialist shops, such as El Corte Ingles department store, extend their hours to open on certain Sundays.

The urban sprawl around the city is undergoing expansion and development as the population of Málaga grows year after year. Included in the many on-going municipal projects is the construction of an underground (“metro”) system to link up key areas, including the large university campus and the International Congress Centre to the west.

There are many festivals celebrated throughout the year in Málaga, such as the International Jazz Festival (at the beginning of November), the Film Festival (held early in March) and much more. The beautiful “Teatro Cervantes” (Cervantes Theatre) is the main theatre in the town and location for these and many such events, as well as for excellent theatre and music.

Eating and Drinking in Málaga:

In Málaga there is no shortage of places to eat and drink. From top notch, Michelin-rated restaurants to the most humble tapas bar, and everything in between. If you find yourself in a Málaga “chiringuito” (beach bar), then the traditional “espeto” sardines cooked outside on a skewer are not only delicious, but also an integral part of the healthy Mediterranean diet. There are many other delicious fresh fish dishes to choose from on most menus and generally at very reasonable prices.

A great way to get a good overall impression of Málaga is to hop on the official Málaga Tour Bus. The whole tour takes under one and a half hours and is well worth it at around 15 euros per adult. The tour bus ticket not only allows the enjoyment of taking in all the sights of the city, but it also offers a free voucher for bus transport to the beautiful botanical gardens on the outskirts of Málaga, called the “Jardines de la Concepción” on the main road to Antequera.

There are many beautifully kept gardens in Málaga also worth seeing.

Pablo Ruiz Picasso Málaga International Airport is one of the busiest airports in Spain, with a staggering 16 million passengers annually. It serves much of Andalusia and especially the ever popular area all along the Costa del Sol.

Other for sale in Málaga, Costa del Sol, Spain

1500 m distance to the beach!!! This Residence defines a new way of life is a concept of apartments with services for seniors. People who appreciate the advantages of having all the services in your own home is domestic as hoteliers and care if both...