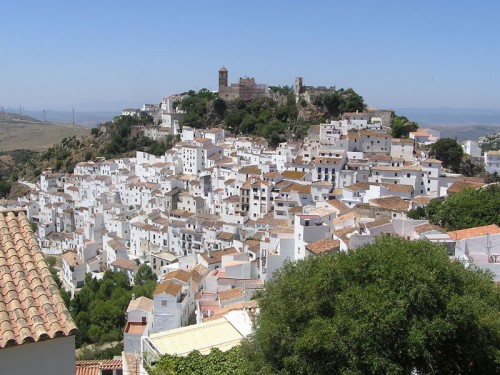 Casares is a picture postcard village with a population of just three thousand and the view from the approach is definitely worth a photo.

To say that Casares is beautiful is an understatement. Most of the white villages are beautiful, but there is something very special about the sight of Casares that causes visitors to park their car and simply stare or take a photo.

There are the sugar cubes again, piled precariously high and just nudging the battlements of an Arab castle. It is hard to believe that this enchanting, typical village is only nine miles from the hustle and bustle of the coast and has somehow succeeded in avoiding the coach tour circuit.

It is best to approach the village for the first time when driving from the coast road (N340/A7) by turning inland at Km. 147 (between Estepona and Sabinillas) near Torre de la Sal and head inland for 15 km. The scenery is picturesque, so take your time. Suddenly, you turn a bend in the road, and are treated to a spectacular view of the village with its medieval fortress.

Luckily, the Restaurant La Terraza is on hand to prepare you for the walk around Casares’ hilly streets. Park the car either here or by one of the other bars a little further on and climb down one of the footpaths that lead into the village. Don’t expect rural venta prices. Click here to see more restaurants in Casares.

Head for the main square Plaza de España. The square has improved greatly in the last few years from the point of view of a tourist in that it now has a welcoming pavement café. For an even better view, try the rooftop terrace. 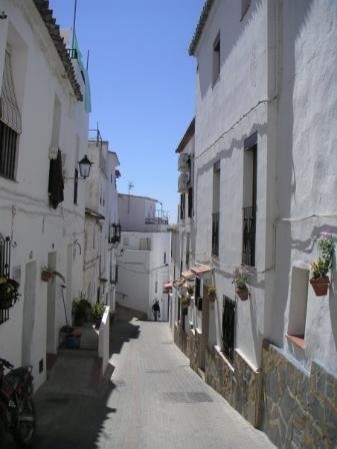 In the square, note the statue of Blas Infante, the Andalucia Nationalist leader who was born here on July 5th, 1885 and executed by Franco’s own rebels at the start of the civil war. Off the square in Calle Carrera, his birth house has been turned into a museum and tourist office.

Those wanting a rewarding experience will follow the narrow street adjacent to the Virgin del Rosario chapel. Keep climbing and eventually you will have reached the top of the town, some 1,400 feet above sea level. There is an old fortress and a derelict church there, as well as a marvelous view overlooking the rooftops of the village.

Watch for peregrine falcons and kestrels and, on a clear day, you will be able to spy the African coast with the Rock of Gibraltar looming craggily in the foreground.

There are two entrances into the fortifications, so you can walk completely around. One is an enclosed passageway, while the other resembles some kind of formal gate. The base of the walls is certainly Moorish but everything above shoulder height dates from after 1500.

The ruined church Iglesia de la Encarnación was built in 1505 when Spain had already been free from the Moors for a number of years. It remained in use until 1845, and the building was badly damaged by anarchists during the Civil War of 1936-39. Today it is locked and deserted.

The Hermitage of Vera Cruz is near the church. The most striking thing for the visitor – except its lack of protection, the children on mini scooters and the drying clothes – is the large domed alcove, which may have been an altar room. Three of its four walls are still standing and are pitted here and there with bullet holes. During the savagery of the civil war when the church was reduced to ruins, it was common for factions to dispose of their enemies by hurling them in time-honoured fashion into the deep gorge below. Looking across the gorge to the right of the Restaurant la Teraza, a simple iron cross marks and remembers another civil war hurling site. 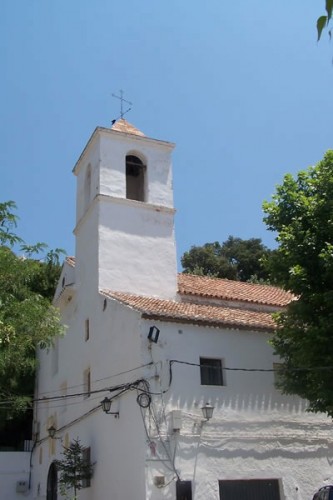 There are the interesting signs of an outdoor auditorium behind the church next to the cemetery. Don’t hang around too long as productions here are as rare as icecream shops. Leave Casares on the road that winds around the village past the visitors centre and football pitch. When you get to the T-junction, you can either turn left for Manilva and the coast, or turn right for the next white village with a story; Gaucin.

After one and a half kilometres from this junction in the direction of Manilva, a small track can be seen. This was once the main route to Jimena and San Martin. Those who have no objection to a bumpy ride can still use it. Over a cattle grid and past a farmstead and a plateau guarded by a ruined sections of wall can be seen. This is where the unguarded remains of the Iberian and Roman town of Lacipo lie waiting.

Iberian and Roman town of Lacipo

Lacipo was founded in the second century BC for the local population. It grew considerably and its economic strength was based on olive oil. The town was a seat of government for the immediate area until it declined in the second century AD. The largest remaining structure that can be seen today is a south-facing section of town wall standing 30 feet high. Lacipo’s ruins don’t offer the traveler who can be bothered to climb the hill a great temple or amphitheatre, but you do get a stunning view. You can also get a remarkable insight into two types of architecture standing side by side, long after the people who knew them, and lived, loved and worked in them have vanished into the years. Be wary of the idly grazing cows. A much fuller description of Lacipo can be read in the book In Search of Andalucia.