Nerja is on the seashore some 50 kilometres from Málaga on the N340 coastal highway, and marks the eastern tip of Málaga’s Costa del Sol. Once a sleepy fishing village, the town now has a population of over 22,000.

Flanked by the Sierra Almijara a dramatic mountain range to the east, the town has fortunately managed to avoid being blighted by the concrete high-rises, which have been the inevitable result of the tourist boom in some of the coastal resorts. The old quarter of the town is still virtually unchanged with narrow, winding streets and whitewashed houses with wrought-iron terraces overflowing with geraniums, from which a canary can sometimes be heard singing.

However, the heart of Nerja is its spectacular “Balcón de Europa” (Balcony of Europe), a magnificent promenade along the edge of a towering cliff, once the site of the great Moorish castle, with sweeping panoramic views of the Mediterranean and the small coves and beaches below, against an awesome backdrop of hazy blue mountains. 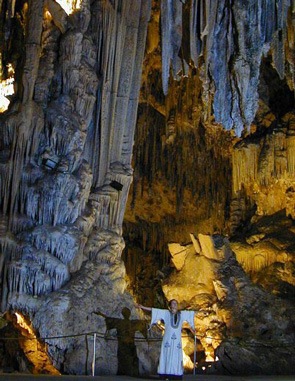 There are plenty of restaurants and cafes here to choose from, and visitors can hire a horse-drawn carriage to explore the most romantic corner of the town.

The town’s monuments include the 17th century Church of El Salvador, in a style which is a charming mixture of baroque and “mudéjar” (moorish), and the beautiful Gardens of Capistrano Playa, which descend to Burriana Beach.

However, Nerja’s most spectacular attraction is undoubtedly its fascinating caves, located just three kilometres from the centre of town. They include archaeological treasures such as paintings over 20,000 years old and other pre-historic remains. One of the enormous natural caverns has been transformed into a concert hall where many performances are staged during the summer. This year, Nerja is celebrating the 38th International Cave Festival, with the participation of many top international entertainers.

Nerja is 50 km from Málaga. It is connected to the western end of the Costa del Sol by a dual carriage motorway. The journey from Marbella takes about an hour, while travelling from Málaga takes around half an hour.