Almost the entire municipality of Estepona is dominated by the majestic Sierra Bermeja range. This mountain range is formed of volcanic rocks known as periodite, a mineral rich in iron oxide, that imparts a characteristic reddish tinge to the terrain. The Paraje Natural (Nature Park) of Los Reales de Sierra Bermeja (highest point 1,449 metres) is located in this setting and has the largest masses of periodite in southern Europe. This natural park with an area of 1,236 hectares also preserves the only forest of Spanish firs on this type of rock 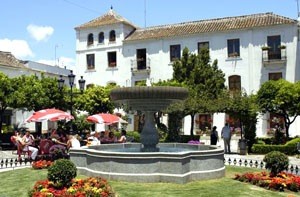 This may give some idea of this area’s extraordinary ecological value. This translates visually into beautiful scenery, especially at the highest elevations, which command an extremely broad panoramic view encompassing not only the coast but also the Atlas mountain range on the neighbouring continent of Africa.

In the lower eastern regions of the area, several short mountain rivers, including the Padron, Castor and Velerin rivers, have banks full of citrus and fruit trees, while the west and some areas near the sea, are overgrown with fruit orchards and, even more frequently, broad fields of grain, low brush and grazing lands. This is in frank contrast to the coastal strip, where, besides the village itself, endless urban developments have sprung up, as is to be expected of a first class tourist locality.

Nevertheless, the area has avoided massive development as much as possible, so there are still large green zones between the most heavily developed areas, and even these generally have open spaces. This has led to the Town Hall of Estepona being honoured with the ‘Live in Spain-CISA 2004’ award for the best residential urban development planning.

The village’s origin is rather confusing, but it seems that the Phoenicians, who established a commercial trading post at this point, called it Astapa. Some historians connect Estepona to the Iberian town of Saldaba, which others think it was in Marbella, and there are even those who cite Cilciana as the origin of the village. Be that as it may, on the hill of El Torreon ruins have been found that may well be from this primitive settlement.

It has been established with more certainty that this locality was besieged by the Roman Lucius Marcius because its residents had remained loyal to the Carthaginians, until it fell to the Romans in 208 B. C. Later, and after the customary confrontations between Muslims and Christians, Alfonso XI fought a historic battle off the coast of Estepona in 1342 and emerged victorious. The village was conquered by Enrique IV, whose rule saw the San Luis castle being built. Some ruins still remain in Calle Castillo.

The locality was subject to the jurisdiction of Marbella until 1729, when Felipe V granted it its independence by means of a document called a “carta de villazgo” (charter of royal burgh privileges) that is preserved in the municipal archives.

2 of the bedrooms have very small windows. Please check the photos. Beautiful ground-floor apartment with a community pool, children''s pool, and beautiful community garden located within a walking distance of the beach. This property is also...

COMPLETION DATE : Last Quarter 2024 A gated residential complex located in a unique enclave surrounded by golf courses. You can enjoy the various common areas such as the coworking area, gym, children''s play area and garden areas. In addition,...